mehalter
/
Multiplayer-Game-of-Life
Fork 0
Code Issues Pull Requests Releases Wiki Activity
This is a Java implementation of a multiplayer version of Conway's Game of Life two-dimensional cellular automata.
You can not select more than 25 topics Topics must start with a letter or number, can include dashes ('-') and can be up to 35 characters long.
87 Commits
1 Branch
0 Tags
290 KiB
Java 100%
Branch: master
master
Branches Tags
${ item.name }
Create tag ${ searchTerm }
Create branch ${ searchTerm }
from 'master'
${ noResults } 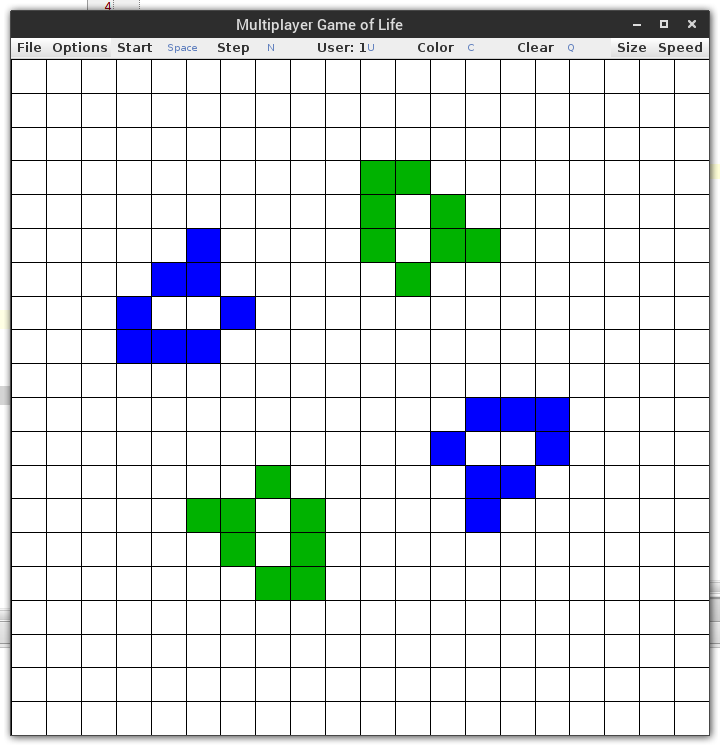 The Game of Life, also known simply as Life, is a two-dimensional cellular automaton devised by the British mathematician John Horton Conway in 1970. The idea is that every cell in a square grid has one of two states, dead or alive. A cell can become alive if it has three neighbors, but dies if it has more than three or less than two. The result is a pattern of cells which mimicks how simple life forms react to isolation and overpopulation.

In this particular version, I have worked on creating a new rule and twist to the game. I have created a "multiplayer" version where the user can define a second "species" on the board along with the first. The new rule is part of the reproduction rule where if a dead cell is touching three living neighbors, it becomes alive due to reproduction. Instead of the dead cell just coming to life, it takes the form of whatever species acounts for the most individuals out of the three living cells. In these situations, the two species have competed, and one has taken over the territory over the other. This allows the user to experiment with competition in the game. You can create systems and see what species wins the most territory, takes over another, or you could see if you can create a mutualistic relationship where the two species help each other survive.

This program is also an implementation of Coway's game that allows you to draw upon years of research by downloading interesting patterns from bitstorm and using these patterns in your game. Also, you can save any grid you like and use it later on in the same manner.

The world of Life has boundless shapes and patterns, each of which has its own unique evolution, behavior, and interaction with the shapes around it. Go ahead and start up the program and give it a try.

Questions, Comments, and Bugs at :